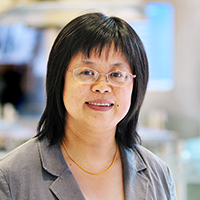 During an animal's development and adulthood many unwanted cells are eliminated by a process called "programmed cell death" or "apoptosis". Such cells undergo specific changes in appearance, die, and are quickly engulfed and digested by phagocytes, or engulfing cells. In addition, cells die due to injury, disease, or other pathological states, the “necrotic cells”, are also cleared efficiently within animal bodies. The clearance of dying cells is important because dying cells may contain material that, if released, could harm neighboring cells. Inefficient removal of dying cells or incorrect removal of cells that should normally live both result in human diseases. Therefore, understanding the mechanisms that control each step in the process of dying cell clearance has important meanings to biological and medical researches. However, despite the recent burst in the study of cell death mechanisms, the mechanisms behind the removal of dying cells remain largely unknown. My laboratory is interested in the molecular mechanisms that control the recognition, engulfment, and degradation of apoptotic cells. We use the nematode Caenorhabditis elegans as a model organism to identify genes and delineate the pathways controlling these events, with the belief that what we learn from C. elegans will be translated to humans.

Previously, I identified CED-1, a transmembrane C. elegans protein as a phagocytic receptor that is specifically expressed in engulfing cells, recognizes apoptotic cells, and initiates their engulfment. In my own laboratory, we have isolated a large number of C. elegans mutants defective in the removal of apoptotic cells. A combination of both forward and reverse genetic approaches have led us to identify proteins acting upstream or downstream of CED-1 in the signaling pathway, which provide conceptual advances in understanding how apoptotic cells are recognized, internalized, and degraded. Particularly, our research has focused on the following three critical steps that lead to the clearance of dying cells.