A last minute question during a meeting sealed the deal for the start of The Cancer Evolvability Program, a part of the National Cancer Institute-designated Dan L Duncan Cancer Center at Baylor College of Medicine.

Dr. Susan Rosenberg, professor of molecular and human genetics at Baylor College of Medicine, was meeting with Dr. Kent Osborne, professor and director of the Duncan Cancer Center. Osborne asked Rosenberg about her interest in leading a new collaborative effort between scientists and clinicians.

“The idea for this new initiative was still in the discussion phase, and I wasn’t 100 percent sure that my involvement would be the most beneficial for this potential program until I heard his answer to my last question,” said Rosenberg. “It was just an incidental question I threw in at the end.”

Rosenberg had for years been looking for a clinical research collaborator with a collection of tumor samples for a certain type of chemo-resistant tumor that had to be treated in a specific manner. She wanted to test whether tumors resistant to a particular chemotherapy were resistant because they had mutations in specific genes implicated by her lab’s data from research on Escherichia coli (E. coli) bacteria. She believed these mutations would help explain how the tumors became resistant to treatment, as well as one day create a testing method to prevent use of ineffective treatments for cancer patients.

“I asked him if he knew of someone who had such a collection, and he answered, ‘Me; I do.’ It was then that I realized how valuable a program like this could be and how organizing it would not only benefit researchers and physicians but also the patient,” she said.

The original idea behind the program started simply – to create a gateway between clinicians and basic scientists who are both working toward more precise testing, treatment and cures for cancer.

“For those of us who want to translate our work from lab to clinic, this program is meant to develop conduits for basic scientists and clinicians. It gives us exposure to large numbers of contacts within an organized group who know what these scientists and doctors are doing,” said Rosenberg. “It is important to connect these two groups, those who are basic scientists and those who see patients, because it is at the most molecular level that cancer drugs act on a person.”

It developed into The Cancer Evolvability Program based on Rosenberg’s own research, which focuses on the idea that mutations that cause cancer are not random, but rather develop through a process of need-enhanced evolution.

When most people think about evolution, Darwin comes to mind. To put it simply, as random genetic mutations occur within an organism, the beneficial mutations are passed on generation to generation because they aid in survival. Evolvability refers to processes that generate the ability to evolve. That includes how mutations occur, or how genomes change and cells change. The results vary. Some changes succeed and are passed on. The others can be generating the varying types, some of which succeed and are passed on.

Rosenberg said, “The pathogens outrun the immune system in an evolutionary arms race.  Cancer also proceeds by generation of variation, for example by mutation, and propagation of the fittest cancer cells. Thus, cancers evolve and ultimately take over,” she said. “Although it is true that mutations promote evolution, and this is how the process works, most of my career has been focused on discovering and describing the underlying molecular mechanisms and showing how these presumed random mutations are not random at all.”

The production of new mutations is regulated by cells, organisms and particularly environments and environmental stress, she said. When a cell or organism finds itself in an environment to which it is not adapted, it does not just die off, leaving only those with beneficial mutations to live on. In contrast, the cell actually cranks up the mutation rate, and therefore the ability of that cell type to adapt to the environment, she said.

Rosenberg’s work focuses mostly on E. coli and the response of bacteria to stress and the mutations that result. In a recent Science publication, she and her colleagues describe an elaborate gene network that causes mutations during repair of double-stranded breaks in the DNA of stressed cells.

Her lab has shown that the rate of mutation in cells can be increased in response to stress such as starvation or environmental challenges, including those posed by antibiotics.

Rosenberg uses E. coli to study molecular mechanisms because its DNA and other components work similarly to those in humans. Understanding this process as it relates to cancer cells in the human body could help explain why cancer cells are able to adapt to their environment rather than being destroyed by chemotherapy.

“When I asked Dr. Osborne about a collection of chemo-resistant cancer specimens, it was because I believe our discoveries in E. coli bacteria could be relevant to why cancer cells are chemo resistant. We think we have a good set of data that will predict which tumors you should not treat with this chemotherapy because it is just not going to work,” she said. “I want to sequence these tumors to see if they had gene mutations that the
E. coli work predicted.”

At the start of her career, Rosenberg studied with Dr. Frank Stahl, one of the founding fathers of molecular biology who discovered how DNA replicates. Her early work included molecular cloning technology and genetic engineering for custom designs of experiments to ask questions of interest.

The lessons she learned during that time are cornerstones in her work today and going forward as she leads the Cancer Evolvabilty Program, co-led by Dr. Janet S. Butel, professor and chair of molecular virology and microbiology at Baylor College of Medicine.

“We were tinkerers, people who create things and ideas that are useful and that can be used for new experiments for various purposes,” Rosenberg said. “We took the perspective of an engineer—if the technology wasn’t there to do the experiment or ask the question we wanted to, it was our responsibility to invent it so that we could ask new questions and find those answers.”  Rosenberg’s lab is currently engineering new protein-based drugs to combat evolution of cancer cells.

However, Rosenberg adds that you can only go so far if you never look outside the lab. “I want to see results and move my work further to disease applications and work with others who are finding new ways to ask and answer questions. The Cancer Evolvability Program is a gateway to do just that.”

Rosenberg said she is in the perfect environment for collaboration.

“Baylor College of Medicine encourages this type of work within our institution and within the Texas Medical Center, and with the support of the Dan L Duncan Cancer Center, this opportunity to find appropriate collaborators who can help us connect basic science directly to cancer research is really wonderful,” she said

No one has time to be unproductive, she added. 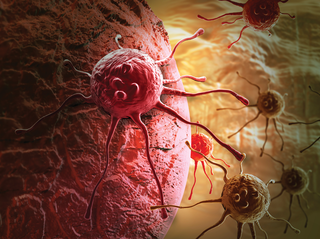 Extrinsic: Infectious Oncogenesis and Microbiome, in which introduction of foreign genes, proteins, RNAs, and other molecules and genetic programs by infectious agents (viruses, microbes, microbiome) promote (or prevent) oncogenesis