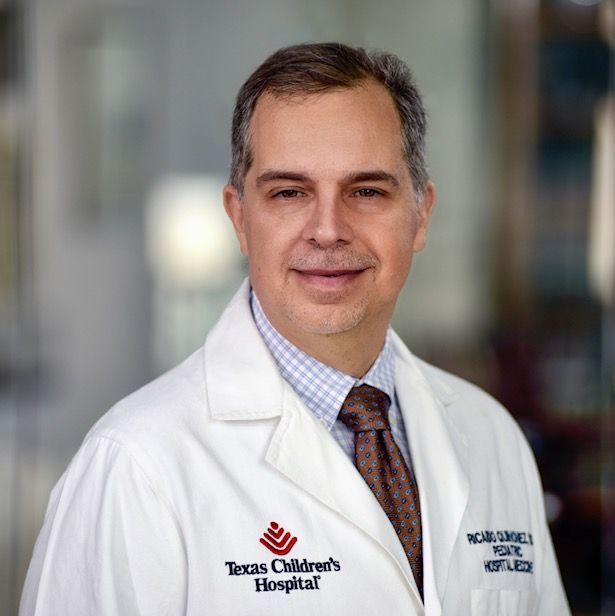 Fulbright and Jaworski Faculty Excellence Award for Teaching and Evaluation
May, 2012
Baylor College of Medicine

Dr. Quinonez completed his medical training at the University of San Carlos in Guatemala City and Pediatric residency at Baylor College of Medicine/Texas Children’s Hospital in Houston, Texas. He is an associate professor of Pediatrics at Baylor College of Medicine and the Chief of the Section of Pediatric Hospital Medicine at Texas Children’s Hospital in Houston. TX. Dr. Quinonez is considered a leader in the national pediatric hospital medicine movement and has served as a leader of various national medical organizations. He is a past Chair of the Executive Committee for the Section of Hospital Medicine of the American Academy of Pediatrics (AAP) where he also serves as a Steering Committee member of the Value in Inpatient Pediatrics Network. He is also the Co-Chair of the Academic Pediatric Association’s (APA) Quality Improvement and High Value Care Interest Groups, member of the Executive Committee for the Healthcare Delivery Committee of the APA and has worked on a number of task forces for the APA and AAP. He also served as a member and Chair of the planning committee of the AAP, APA, and Society of Hospital Medicine (SHM) led national Pediatric Hospital Medicine scientific meeting. Dr. Quinonez also served in the committee that applied for recognition of pediatric hospital medicine as a subspecialty and serves as one of 9 members in the newly created Sub-board of Pediatric Hospital Medicine of the American Board of Pediatrics.

Dr. Quinonez has served in national panels assessing quality indicators for pediatric conditions ranging from IBD to respiratory illnesses including as a member of the Standing Pediatrics Committee of the National Quality Forum. He completed advance training in Quality and Evidence Based Medicine at Texas Children’s Hospital where he served as the Director of Quality and Research for the Section of Hospital Medicine from 2010 to 2012. Currently he is Vice-chair of the Council on Quality Improvement and Patient Safety of the AAP.

His main academic interest is in the issue of value in the care of children and particularly in the subject of overuse of medical test and therapies, overdiagnosis and overtreatment in pediatrics. He led the first pediatric effort for the American Board of Internal Medicine Foundation’s Choosing Wisely Campaign and has authored several publications on the issue of value in health care and conducted numerous national and International presentations on this subject.

Dr. Quinonez is the recipient of an award as a selected Fellow in Hospital Medicine (FHM) from SHM and the Award for Excellence in Clinical Care given to one pediatric hospitalist each year at the National Pediatric Hospital Medicine Meeting.