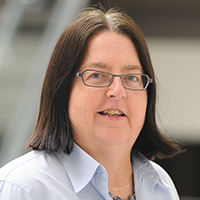 Dr. Conner is interested in IgA and its role in gastrointestinal mucosal defense against pathogens, including rotavirus and Clostridium difficile. These studies seek to identify the immunologic factors that are important in and that define underlying mechanisms of IgA induction and maintenance and the impact of intestinal pathogens on IgA specificity and diversity in the intestine.
Rotavirus is the most common cause of severe dehydrating diarrhea in children and results in the death of ~600,000 children yearly worldwide. Despite new efficacious vaccines, the immune mechanisms that protect against rotavirus have yet to be well defined. We identified that rotavirus polyclonally activates B cells in Peyer’s patches in the intestine through a novel mechanism. Work is now focused on using rotavirus as a model to define the cells and signaling pathways involved in innate immune signals that result in this polyclonal B cell activation by dendritic cells and development of early rotavirus-specific IgA antibody in the intestine. The cytokines and signaling pathways that induce IgA class switch recombination are being explored and current data support that rotavirus induces IgA by non-canonical signaling. Understanding the mechanisms by which this virus induces intestinal IgA and how this IgA is maintained will broaden our knowledge of IgA induction and regulation in the intestine and this information will be used to develop more effective mucosal vaccines and new methods of therapy. Together, these data suggest that novel insights about intestinal immunity can be gained by our studies to define basic pathways through which IgA is induced in the intestine in response to viral pathogens.
Clostridium difficile (CD) is a gastrointestinal pathogen that is a major and increasing health care burden costing the United States an estimated 3 billion dollars/year. CD infection (CDI) is now the most common healthcare-associated infection. Mortality rates range from 5.7% to 15% with an estimated 7,752-20,000 deaths occurring annually from hospital onset CDI. CDI is a toxin-mediated disease in the large intestine. It has long been recognized clinically that immunosuppressed individuals, whether due to age, therapy with immunosuppressive drugs, or immunosuppressive infection, are at increased risk for CDI and relapsing CDI but the critical immunologic factors are not known. There is much indirect/correlative evidence supporting an important role of adaptive immunity to CDI. Using a mouse model, we are empirically probing the requirement for IgA and adaptive immunity to CDI. Gaining a greater understanding of and identifying the key immunologic mediators of protection will contribute important insights to ongoing efforts to develop efficacious vaccines for CDI.