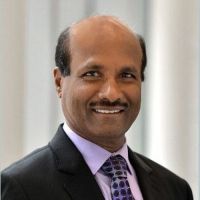 Dr. Chandrasekhar Yallampalli joined Baylor College of Medicine in September 2013, adding an extensive
body of research that spans nearly three decades. He and his team have established the Basic Sciences Perinatology Research laboratory to continue his investigation into various aspects of perinatal biology, ranging from early pregnancy to delivery.
A primary area of the laboratory’s research focuses on the body’s vascular system and how it adapts to pregnancy. A woman’s blood volume increases 1.5 times during pregnancy, causing significant changes in the body’s blood vessels as they expand to accommodate the influx of blood flow without increasing blood pressure. How this works, both at the molecular and mechanistic levels, is still not fully understood. At the same time, we know that this process fails in some pregnancies, leading to hypertension, preeclampsia, and other compromised conditions.
The goal of our research is to establish a baseline for vascular adaptations during pregnancy as well as to investigate why and how these adaptations fail. We have previously shown that certain peptides may be involved in vascular adaptations during pregnancy, and that steroid hormones may be involved in these mechanisms. Ongoing research promises a deeper understanding of this process, and significant hope that we can prevent conditions like hypertension in pregnant women in the future.
In a related area, our team is also investigating placental function and how it may become compromised with the onset of preeclampsia, leading to poor fetal health and birth weight.
A second key area of our research looks at how a woman’s health and various stressors that occur during her pregnancy may impact her adult offspring, having what is known as a second-hand effect. We are investigating factors such as low protein diet, hypertension, diabetes, and high-stress environments and their impact on offspring health. While this remains a new area of study, ultimately, we hope to address measures that can reverse this process, whether during pregnancy or after birth, to improve health outcomes.
In this same area, this past year our team published a paper demonstrating that elevated maternal testosterone during pregnancy leads to hypertension that is associated with hyperandrogenism and defective gonadal steroid genesis in adult offspring. In addition, we have established that the maternal low protein diet-induced hypertension in the adult offspring females is related to the elevated androgens. In a third area of our study we are beginning to understand the role of adipose tissue in pathophysiology of gestational diabetes. Adipose tissue dysfunction appears to be site specific and some of the factors such as adrenomedullin may play a mediator role on these processes.