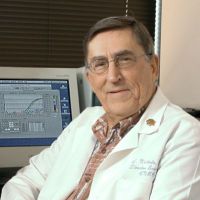 My interest in studying the problems of infants with malnutrition and chronic diarrhea began at Yale–New Haven Hospital that same year with a patient named Stevie who had what was then called “intestinal decomposition” in Germany and “intractable diarrhea of infancy” in America, a condition with an extraordinarily high mortality and with no obvious cause. My clinical mentor at that time, Dr. Nelson Ordway, suggested we use a modular casein formula in this malnourished infant whose chronic diarrhea seemed to occur only when he was fed. We tested a series of modular formulas with different carbohydrate sources, including one made with ripe bananas purchased by my wife Veda. Stevie recovered on a formula whose carbohydrate source was starch oligomer.
While I was Chief Resident in Pediatrics at Yale, Dr. Russell Blattner contacted me about joining his Pediatric faculty at Baylor. I told Dr. Blattner that I wanted to work in the subspecialty discipline of pediatric nutrition and gastroenterology. Dr. Blattner was unsure of the need for this subspecialty, but offered to establish this service if, while serving as House Staff Director at Texas Children’s Hospital, I could demonstrate any value in this discipline! Arriving in 1964, I discovered many babies like Stevie on the Baylor-affiliated infant wards and we began to study their problems in detail (1–23). These babies had a syndrome of diet driven chronic diarrhea that Bill Klish, my first GI Fellow, named Acquired Monosaccharide Intolerance (AMI), because of the glucose found in the stool (2). The house staff called the disorder “Slick-Gut Syndrome” because of the partial villous atrophy seen on small bowel biopsy (10,11). The modular refeeding method (1) resulted in some success, but there were many failures.
A major advance in AMI management occurred in 1969, when total parenteral nutrition (TPN) was implemented. The combination of modular formulas and TPN resulted in recovery of most AMI cases and a nearly 50% reduction in mortality on the infant wards. This convinced Dr. Blattner of our clinical relevance as subspecialists and he permitted us in 1970 to establish the Pediatric Nutrition and Gastroenterology Service at Baylor, a service presently headed by Dr. Bill Klish. From 1965–70, I carried out studies of malnutrition in Jamaica with Dr. John Waterlow, who became my nutrition mentor, and Dr. George Alleyne, my clinical collaborator (13).
My fellows and I studied malnourished infants with Drs. Fernando Viteri and Jorge Alvarado in Guatemala (14,15), Dr. Adalberto Parra in Mexico (16,17) and Dr. Francisco Carrazza in Brazil (18–20). From each of these clinical collaborations, we became more skilled in diagnosis and management of malnutrition and chronic diarrhea. From 1978 to 1993, I was director of the U.S. Department of Agriculture Children’s Nutrition Research Center at Baylor and Texas Children’s Hospital (CNRC). After this administrative responsibility, I enjoyed sabbatical training in molecular biology in Switzerland with Dr. Erwin Sterchi, my molecular mentor. We have now sequenced the maltase-glucoamylase cDNA and gene (21)(unpublished). As before, it was another patient, Kevin, whose problem stimulated our research interest. Kevin was a child with genetic glucoamylase deficiency and it was he who opened the molecular era of my clinical career in 1998 (22, 23). I thus turned from the clinical study of infants with acquired carbohydrate intolerance to those with genetic carbohydrate intolerance—a transition from diseases of nurture to diseases of nature.