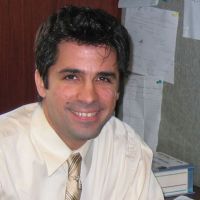 ... Broadly speaking, bacterial pathogenesis refers to the study of the origin and progression of a disease which results from infection by bacteria. In some cases, specific disease symptoms are directly caused by the actions of the bacteria; in other cases, disease symptoms are a product of the immune system’s attempt to clear the pathogen. In both cases, there exists a dynamic interplay between the host and the invading bacteria which culminates in the survival of one but usually not the other. In an age where the remarkable adaptive and replicative ability of bacteria has lead to the rise of strains resistant to conventional antibiotics, modern medicine is faced with the challenge of discovering and validating new targets for drug development. Work in our laboratory attempts to understand this dynamic interplay on a mechanistic and reductionist level in hopes of acquiring information for the development of novel antibacterial agents. Bacillus anthracis, the etiological agent of the disease anthrax, has a storied interaction with humankind. One of the earliest descriptions of infectious disease during Egyptian times, the “plague of boils”, may have been caused by this pathogen. The first careful studies of B. anthracis were performed by Robert Koch; indeed his work led to the elucidation of the B. anthracis life cycle, which was the foundation behind the development of the “postulates”. The life cycle of B. anthracis is realized in ruminants and begins with the infectious particle, a spore, entering the host. A common theory is that spores are transported via phagocytes to the lymphatics. In a poorly understood manner, spores germinate and vegetative cells enter the blood. Once initiated, the host succumbs very rapidly to the disease and, in the intervening weeks as the carcass decays, vegetative cells sporulate, thereby regenerating the infectious particle.

B. anthracis is an excellent model pathogen to study bacterial pathogenesis. Its genome harbors all the virulence determinants required to efficiently kill the host, including the ability to germinate in vivo, adhere to host tissues, produce toxins, evade the immune system, and sequester limiting nutrients for growth and replication. Since many of these virulence systems are similar in the mechanism of action to those of bacteria which cause more common infections, knowledge garnered herein is applicable to their understanding as well. Iron is an essential nutrient used by almost all organisms. Bacterial pathogens must acquire iron in order to grow inside mammalian hosts. The host, however, limits the availability of free iron, thereby providing an effective defense strategy against infection. In response, bacteria have evolved clever ways to subvert host sequestration of iron. We have uncovered a cell wall-based heme acquisition system in B. anthracis with similarities to the iron-regulated surface determinant (Isd) locus in S. aureus. The first three genes, ba-isdC, x1, and x2, contain NEAT (near iron transporter) domains, a conserved structural motif present in greater than 50 different Gram-positive bacteria. We have determined Ba-IsdC is a heme-binding protein necessary for heme acquisition in B. anthracis. Ba-IsdC is anchored to the cell wall by sortase (SrtB), a ubiquitous family of transpeptidases in Gram-positive bacteria which covalently append surface proteins to the peptidoglycan. The function of x1 and x2, both of which contain NEAT domains, is unknown. We hypothesized the smaller of the two, x1, encoded a secreted heme-scavenging protein, or “hemophore”, which acquires heme from host proteins during B. anthracis infection.

To test this hypothesis, we utilized a combination of genetic, biophysical and biochemical approaches aimed at determining the function of x1. Our studies indicate X1 is secreted from B. anthracis under iron-limiting conditions and expressed during anthrax disease. Purified X1 binds heme and is able to extract heme from mammalian hemoglobin (Hb). B. anthracis lacking x1 cannot effectively utilize Hb as a source of iron for growth. The mechanism of heme extraction from Hb is novel and is likely a property of all proteins which harbor NEAT domains, suggesting our work is applicable to iron acquisition in many Gram-positive pathogens. This is the first description of a secreted hemophore from Gram-positive bacteria and represents a target for therapeutic intervention. The elucidation of this heme-acquisition system in B. anthracis coincided with an initiative to discover inhibitors of sortase. The cell wall is indispensable for the survival of Gram-positive bacteria and lies at the interface of the bacterial/host interaction. Cell wall-anchored proteins are important in the infectious process by participating in diverse functions such as adhesion, immune system evasion, and iron acquisition. Sortase anchors these proteins to the cell wall via a conserved LPXTG-like motif at the C terminus of sortase substrates. Approximately 200 homologs of sortase have been identified with ~ 900 potential substrates in over 50 different species of Gram-positive bacteria. Loss of sortase leads to reductions in staphylococci, streptococci, and listerial pathogenesis in several animal models of infection, thus highlighting this transpeptidase as a target for anti-infective development. Along these lines, we screened ~ 135, 000 small molecules for inhibition of S. aureus sortase A, the most prominent sortase isotype in Gram-positive genomes.
Compounds which demonstrated the most drug-like properties were subjected to additional screens to yield the most potent and specific sortase inhibitors, which were grouped into classes according to their structure. The most promising compounds, the aryl b-aminoethyl ketones (AAEK), showed broad-spectrum inhibition of multiple families of sortases from both S. aureus and B. anthracis. The inactivation of sortase via the AAEKs was through a covalent, step-wise mechanism following the generation of a highly reactive intermediate in the sortase active site. Co-crystals of sortase with inhibitor allowed us to define structural factors on sortase mediating inhibitor binding and specificity. This type of inactivation, termed mechanism-based inhibition, is found among on-market drugs and represents a promising candidate for further development.