The area of research interest for the Mani Lab is Molecular Mechanisms of Steroid Hormone Action in Brain Function.

The long-term goal of our research is to understand the molecular and cellular mechanisms of steroid hormone action in the brain that regulate physiology and behavior. Current studies in the laboratory are examining the molecular regulation of progestin receptor (PR) in the brain to understand how the activated genes and genomic networks alter the physiological state of the neurons to activate behavior

We have identified three distinct mechanisms by which neuronal PRs are regulated in the central nervous system (CNS).

1. We have demonstrated that Progesterone effects are primarily mediated by its interaction with nuclear PRs.

2. In addition to its function as a progesterone-dependent nuclear transcription factor regulating gene expression in the CNS, PRs could also be activated in a "ligand-independent" manner by certain neurotransmitters like dopamine to regulate reproductive physiology and behavior. We demonstrated the existence of cross talk between the progesterone- and dopamine-initiated signaling pathways and highlighted the critical role of DARPP-32 in the integration of these pathways.

3. Furthermore, recent studies from the laboratory have also identified the involvement of cytosolic pathways mediating the rapid non-classical effects of progesterone in the activation of PRs.

We are currently exploring the cross-talk mechanisms by which these pathways converge and activate the classical intracellular receptor-dependent pathways at transcriptional and post-transcriptional levels in the CNS using a variety of molecular, cellular, biochemical and behavioral approaches. The studies will provide a molecular framework for the regulatory mechanisms by which neuronal PRs in the CNS integrate signals from multiple stimuli to control gene regulation and biological function.

A second research interest of the laboratory is to understand the neurobiological mechanisms that underlie the sex differences in the function of the adult hypothalamo-pituitary-adrenal (HPA) axis. Sex differences in the HPA axis arise as a result of the influence of gonadal steroid hormones during development and adulthood. It is well known that females exhibit a more robust activation of the HPA axis following stress than do the males. We are investigating the mechanisms by which neural estrogen receptors mediate sex differences in the HPA function. Traditional gene knockout and conditional mutant mice are currently used in these studies. 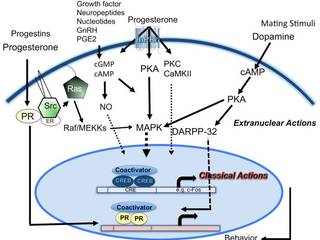