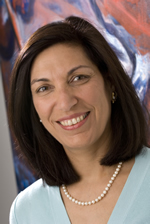 As researchers at Baylor College of Medicine study MeCP2, the protein whose lack results in Rett Syndrome – a devastating autism spectrum disorder – they have come to understand the protein's importance in normal cells and how losing it can result in a series of behaviors, including aggression and overeating, that were never before recognized. A report of their work appeared a recent issue of the journal Neuron.

"This protein is critical for the proper function of the majority of neurons," said Huda Zoghbi, M.D., a BCM professor of pediatrics, neurology, neuroscience, molecular and human genetics and a Howard Hughes Medical Institute investigator who is senior author on the paper. Zoghbi and her laboratory discovered the Rett gene.

Rett Syndrome affects between 1 in 10,000 females, who express a wide variety of symptoms, most of them neurological.

"Observe a girl with Rett Syndrome and you will see that she has most of the neurological symptoms you are familiar with," said Zoghbi. "There are movement problems, balance problem, tremor, seizures, autism, learning and memory problems, anxiety and even more."

Girls with Rett Syndrome lack MeCP2 (found on the X chromosome) in as many as 50 percent of their neurons. The severity and breadth of symptoms they experience depend on the percentage of neurons that lack the protein.

To determine which neurons affect which behaviors, Zoghbi and her colleagues engineered mice to lack MeCP2 in small populations of neurons in the hypothalamus, a command center of the brain that controls several physiological states.

When they eliminated the MeCP2 protein from one specific group of neurons in the hypothalamus, the animals showed one feature of Rett Syndrome: increased levels of a stress hormone in response to stress. The animals also became aggressive when they were put into a novel situation.

"That meant that the few neurons that lacked MeCP2 govern this behavior," she said. "It also suggested that we need this protein to temper the response of our neurons so we behave appropriately when we experience a new social setting."

People with autism frequently get frustrated in novel situations, she said. A colleague in Germany reported seeing aggression in patients with milder Rett Syndrome.

"The other thing that surprised us was that the animals gained weight and kept on getting more obese as they got older," she said. "They ate unstoppably. In the absence of MeCP2, the signals that work within the hypothalamus to tell us we are full and need to stop eating are in part regulated by this protein. Without MeCP2, the neurons don't get the signal and you keep eating. It reveals a function of the protein not suspected before," she said.

The study also demonstrates that this technique – knocking out essential proteins in small populations of cells in the brain – could help reveal which neurons are important for which behaviors.

In the future, Zoghbi and her colleagues plan to study the function of MeCP2 in other neurons using the same technique.

A summary of the article can found at Deletion of Mecp2 in Sim1-Expressing Neurons Reveals a Critical Role for MeCP2 in Feeding Behavior, Aggression, and the Response to Stress.