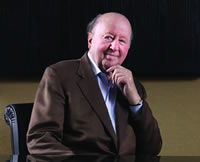 George Mitchell and his wife Cynthia are committed to helping BCM's innovative scientists find answers to diseases that affect the brain.

At 88 years old, this up-by-the-bootstraps billionaire is as committed to his community as he was when he made his first million as a wildcatter discovering oil half a century ago. His projects range from contemplating the glorious wonders of the universe, black holes and the genesis of galaxies with the Giant Magellan Telescope to down-to-earth solutions for Alzheimer's disease and health care concerns for our aging population.

"Baylor College of Medicine is an innovative place with lots of talented people. It's important to me to support people who see solutions to today's problems," Mitchell said during one of his regular Houston workdays in his downtown office.

After more than two decades of generous donations to BCM, George Mitchell and his wife Cynthia are still among its most loyal supporters. Gifts, including personal contributions, donations from The Cynthia and George Mitchell Foundation, and those from Mitchell's former company, Mitchell Energy & Development Corp., continue to benefit several BCM initiatives including the Alzheimer's Disease and Memory Disorders Center, the Huffington Center on Aging, the Maria and Alando Ballantyne Atherosclerosis Laboratory, and prostate cancer research in the Scott Department of Urology.

"Our Alzheimer's program has been very lucky to have supporters like the Mitchells who can see the importance of research in combating such a deadly and heartbreaking disease," said Rachelle Doody, M.D., Ph.D., Professor of Neurology and the Effie Marie Cain Chair in Alzheimer's Disease Research at BCM. "We are trying hard to find a better future for those who are suffering and for those who are at risk," she added.

Cynthia Mitchell, who has been married to George Mitchell for 64 years and is the mother of their 10 children, was diagnosed with Alzheimer's disease in 2001. That same year, the Mitchells committed their first gift of $1 million to stimulate research in the prevention and cure of Alzheimer's disease. They have since pledged another $5 million to brain aging and dementia.

"Alzheimer's is a very tough disease with no magic bullet to cure it. We hope to see some significant advances in the next two to five years," Mitchell said. "Early diagnosis is very important. Right now, that's where a lot of focus should be. I have 10 children, and they are all worried about the implications of Alzheimer's for their future."

The Mitchells' gifts support ongoing projects at BCM that study how normal brains age and what factors increase susceptibility to onset of Alzheimer's disease and other dementias. Also being investigated are the factors that make disease progress rapidly in some patients and slower in others. Such research will contribute to improvements in treatments that could include lifestyle changes, drugs, and immunization approaches.

"This research will only get more important as our population continues to age. I'm here to help society in general. That's always been important to me," Mitchell said.