A drug studied at Baylor College of Medicine in Houston may help buy more time for patients with moderate to severe Alzheimers disease.

While the drug, memantine, is not a cure, a study published in the April 3 issue of the New England Journal of Medicine, found that it slowed the decline of patients in the more severe stages of the disease compared to a placebo. No medicine is currently available in the United States to treat this stage of the disease.

The study showed that those patients who were taking memantine did better than the people who were not, said Rachelle Doody, MD, PhD, an associate professor of neurology and director of the Alzheimers Disease Center at Baylor. This showed up in their memory and thinking ability, in their ability to maintain daily functions, and it was apparent to the clinicians who were taking care of the patients.

More than four million Americans have Alzheimers, which robs a persons memory and ability to care for him or herself. The decline can take from three to 20 years. When patients with Alzheimers reach the moderate to severe stages of the disease, they begin to lose many of the abilities that most people learn in early childhood and need help to dress and bathe themselves, eat and walk. Stress on the caregiver increases substantially during this stage, because the patient can no longer care for him or herself.

Current treatments for Alzheimers cannot stop the progression of the disease, but they can help slow its decline and help with the symptoms.

The U.S. Food and Drug Administration has approved four drugs in the class of cholinesterase inhibitors for treating Alzheimers disease symptoms. They include tacrine (Cognex®), donepezil (Aricept®), rivastigmine (Exelon®) and galantamine (Reminyl®).

Cholinesterase inhibitors temporarily boost levels of acetylcholine, a messenger chemical that becomes deficient in the Alzheimer brain. These drugs are designed to block an enzyme that breaks down acetylcholine. The drugs have been used in patients with mild to moderate Alzheimers disease with some success. The Alzheimers Disease Center was a site for many of the initial clinical trials on this class of drugs, and continues to investigate their effectiveness for patients with more severe Alzheimers. 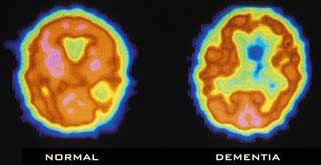 A Positron Emission Tomography (PET) scan shows the difference between a healthy, fully functioning brain, left, and an Alzheimer's infected brain. Red indicates parts of the brain that are still active and fully functioning, while green highlights the neurological deterioration associated with the disease. The blue mass toward the center indicates brain matter that has already died.

Since cholinesterase inhibitors and memantine work on different mechanisms in the brain, scientists hypothesize that combining the two drugs may be an effective treatment for Alzheimers. A second study recently presented at the American Academy of Neurology meeting in April by Martin Farlow, MD of Indiana University School of Medicine found that combining memantine with donepezil may improve memory and thinking skills in advanced-stage patients.

A total of 32 research institutions participated in the memantine trial. Doody, second author of the memantine paper, was the study's principal investigator at Baylor. Barry Reisberg, MD, a professor in the department of psychiatry at New York University of Medicine was the papers first author.

The 252 patients in the study were given either memantine or a placebo for six months. Researchers conducted a series of tests to measure their mental and physical abilities. While all participants declined, participants taking memantine scored better than those taking the placebo, and declined at a slower rate.

Patients with severe Alzheimers Disease will slowly, but surely lose some of their abilities, things like the ability to feed themselves, or the ability to participate in their own personal hygiene care, Doody said. In this study, those who took memantine did not lose ground in the same way as those who did not.

While memantine has been available in Germany for 10 years, it has not been approved by the FDA in the United States. Doody said she expects the FDA will make the decision whether or not to approve the drug later this year.

Until new treatments for severe Alzheimers are approved, the best method is early diagnosis, Doody said.

People need to know that Alzheimers disease can be diagnosed, and that diagnosing it early and treating it early makes a difference, Doody said. I think that right now many patients are never diagnosed, or families wait for physicians to notice the problems, and that doesn't happen until its very advanced.