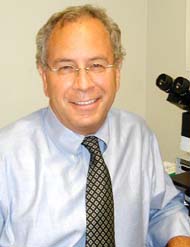 Screening drugs that work against defects in the tiny pores or channels that allow calcium to flow in and out cells is already easier because of a specially bred mouse that has the "pure" form of absence seizures (brief lapses in consciousness) usually seen in children, said researchers at Baylor College of Medicine in a report that appears in the current issue of the Journal of Neuroscience.

"This shows that an extra copy of a gene in a mouse can cause a pure form of absence epilepsy, without any other neurological problems," said Jeffrey L. Noebels, M.D., Ph.D., professor of neurology, neuroscience and molecular and human genetics. He is director of the Blue Bird Circle Developmental Neurogenetics Laboratory, where this research took place.

Previously, the models of absence epilepsy proved disappointing because the animals also had ataxia, a neurological disorder associated with walking and standing problems.

Calcium channels are special pores in cell membranes that open and close to let in charged calcium molecules at appropriate times in the life of a cell. Too much or too little calcium can affect the cell’s ability to carry out its normal function. Such defects in neurons are associated with epilepsy and other neurological disorders.

Childhood absence epilepsy accounts for 2 to 8 percent of all epilepsy in children. Most such seizures are spells in which the child is not aware of his or her surroundings and is not responsive. Such spells last only seconds, in most cases.

In this case, Noebels and his colleagues overexpressed a new "T-type" calcium channel gene in the neurons by inserting a second copy of the gene.

In this case, it causes the pure form of absence epilepsy similar to that seen in children. In a twist of the old song, the mouse now has "two for T," said Noebels.

Noebels said much of the work was done by Wayne Ernst, Ph.D., while he was a graduate student in his laboratory.

Others who took part in this research include Yi Zhang, Jong W. Yoo and Sara J. Ernst, all of BCM.