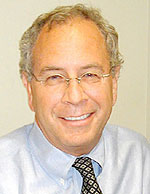 As a physician-scientist specializing in epilepsy, Jeffrey Noebels, MD, PhD, sees the profound effect the disease has on his patients daily lives, from preventing them from holding down jobs to simply driving down the block.

He does his best to help them manage their disease by prescribing medications to reduce the severity and frequency of their seizures. Surgery is another option for patients who don't respond to medication and is usually an effective one, eliminating an estimated 80 percent of seizures.

But while current treatments for epilepsy reduce the number of seizures in epilepsy patients, they don't affect the amount of damage inflicted by seizures on the brain. Noebels lab is investigating why the severity of seizure damage varies from person to person--causing severe damage to one while leaving another relatively unscathed.

One of the newest concepts in epilepsy is that specific genes may determine whether a person will have a seizure or not, while others may control the amount of damage caused by the seizure, Noebels said.

Noebels, recently elected president of the American Epilepsy Society, is a professor in the departments of neurology and molecular and human genetics and director of the Blue Bird Circle Developmental Neurogenetics Laboratory at Baylor College of Medicine. Funded by a continuing grant from the National Institutes of Health, he and his colleagues have been searching for genes that might be linked to epilepsy since the labs start in 1986. Now, he believes they have found a gene that may help protect the brain from cell death caused by seizures.

In people with severe epilepsy, cell death is a major cause of cognitive problems and memory loss, Noebels said.

We compared two strains of mice, one that was seizure-damage resistant to another strain that was vulnerable to seizure damage, he continued. We were able to isolate several genes expressed that have long been known as neuroprotective, but one had never been seen in the brain before.

After isolating the gene, a member of the bcl2 gene family, Mayra Mori, PhD, a postdoctoral fellow in Noebels laboratory, found that in the presence of this gene, brain cells were much less likely to die. To test his theory further, they obtained from Harvard University a knockout mouse lacking the gene. Then they induced seizures in the mice and analyzed the brain tissue. The knockout mice had severe brain damage.

The results showed that the gene was able to protect against seizure-induced cell death, and thus contributed to the difference between these strains of mice, Noebels said.

But do humans have this gene? Using post-mortem brain tissue samples, the laboratory found the gene in patients whose brains had suffered severe damage. Testing brain biopsies from epilepsy patients undergoing surgery might be the next step, Noebels said.

It has been a challenge to find which genes might make the difference between a patient whose brain is protected from the cell death and whose brain is not, Noebels said. Once you have that molecule, you have an additional target, a validated target, to discover a drug to modify the amount of that gene in your brain, and then to determine whether that could work in emergency situations.

Finding neuroprotective genes could also be important in treating other conditions that involve cell death, such as stroke or concussions.

There might be a window of opportunity to prevent cells from dying for couple of days after the seizure or stoke, Noebels said. It is always important to find new targets, and every new molecule we investigate offers another opportunity.