Two flat-screen, high definition televisions sit side-by-side, with the same image. From a distance, the pictures are the same.

Close up, you may see subtle variations. Pixels may be dropped in different places. Some may be blurred. What if some of those pixels are known to cause the screen to "black-out" or flicker temporarily?

If you could make the image sharper, could you find those defective pixels and thus determine which screen is going to lose the image? 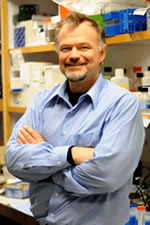 That is what Dr. Jeffrey Noebels, professor of neurology, neuroscience and molecular and human genetics at Baylor College of Medicine, and Dr. Richard Gibbs, director of the Baylor Human Genome Sequencing Center, sought to do seven years ago when they began the first large-scale sequencing project to survey nearly all the genes encoding ion channels, the electrical 'pixels' of the brain.

These channels are the tiny pores that allow molecules of sodium, calcium, potassium and chloride to move in and out of the cell, creating the electrical impulses that drive signaling within brain networks. A disruption of the signaling pattern leads to epilepsy, a common severe neurological disorder.

Because the causes of most cases of epilepsy remain mysterious, they hoped to identify specific variations in genes (those particularly bad "pixels") that might predict who will have seizures. Hundreds of subjects and terabytes of data later, Noebels, Gibbs and their colleagues at BCM found dozens of individually rare variants in the epilepsy-related ion channel genes in people who had epilepsy and ,intriguingly, nearly just as many in those who did not. Why are some individuals more fortunate? That question is one of many posed by their article in a recent issue of the journal Cell.

Analyzing those personal variations and how they contribute to a larger picture is part of the next step in understanding unexplained epilepsy — and many other disorders linked to ion channel diseases throughout the body — including the brain, eye, ear, heart, muscle, kidney and pancreas. Typically, when a known disease gene is uncovered, a patient is told he or she is at risk for the condition. However, a better answer may lie in the patterns of all the defective channels rather than any single one of them.

Not all variation causes disease

"We are all born with a few erratic pixels, but luckily they do not always add up to disease. It takes a village," said Noebels, who is also director of the Blue Bird Circle Developmental Neurogenetics Laboratory at BCM and a pioneer in genetic epilepsy research.

"We began looking at ion channels because they are the largest class of genes that contribute to seizures. In some families, even a single defective one is a master switch for epilepsy," said Noebels. "But we soon realized that small defects in other channels could aggravate the problem in some individuals, or mask it in others. Instead of looking at one incriminating gene at a time and pronouncing it guilty, as is often done in single gene testing, we wanted to step back and examine them all."

Baylor neurologists were able to recruit many people with and without epilepsy to participate in the DNA study, and together with the Human Genome Sequencing Center, a leader in mammoth sequencing projects, developed an 'ion channel pipeline' to analyze the DNA.

"We found there were perfectly healthy people walking around with single gene mutations that are known to cause epilepsy and yet they don't have the disease," said Dr. Tara Klassen, a postdoctoral researcher in Noebels' laboratory and lead author of the study. "Why not?"

The answer could rest with the way ion channels work, she said.

"Many genes in a cell have very distinct functions, and the more mutated genes you have, the worse off you are."

Ion channels work differently. They are a family of genes that all tune the firing patterns of brain cells in small overlapping ways. They open and close at different rates and in different combinations, but together share control of the overall excitability in networks of nerves. When certain networks become overexcited, a seizure may result.

"We conclude that epilepsy may arise from a complex mixture of altered channels, and may be prevented by other channels working in the background," said Noebels. "If one works poorly, another can compensate by working better. The combination can mask the individual defect."

"Looking at a full profile rather than jumping to a conclusion after a single result completely changes our way of thinking about how to counsel those who might test positive for a single genetic variant," he said.

"We now know the profile of these channel variations is more important than the presence of any single ion channel defect, and that understanding the meaning of the profile and applying it to patients will require the skills not only of neurologists, but also bioinformatics specialists and experts in devising computational models of disease," said Noebels. "The next step is to take the ion gene profile and figure out what it means for the individual."

This understanding could also lead to better therapy. Nearly one-third of people with epilepsy do not respond to current drugs used to treat the disorder. Many of those drugs target individual ion channel genes implicated in epilepsy.

"We also found that it was quite common for a person with epilepsy to have more than one genetic cause for it," he said. "What if an individual has epilepsy arising from five or more defective ion channels? One drug won't cover them all."

"This finding is a wonderful example of how we can bring personalized genomic analysis closer to everyday health care," said Gibbs. "We now know how important the pattern of rare variants found in each individual really can be."

Funding for the work came from the National Institute of Neurological Diseases and Stroke, the National Human Genome Research Institute, the Gillson Longenbaugh Foundation and the Blue Bird Circle Foundation of Houston.