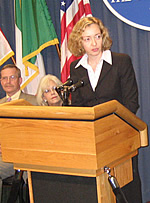 Alzheimer's Awareness Day on Feb. 6, 2007, was not just another day at the office for Baylor College of Medicine Alzheimer's expert Rachelle Doody, M.D., Ph.D. Instead of attending to patients in her clinic as usual, she was roaming the halls of the Texas Capitol building, trying her hand at "academic lobbying."

For the second time in as many legislative sessions, Doody journeyed to Austin, Texas, to generate support among lawmakers for research into the disease. Alzheimer's Awareness Day is held on the birthday of former President Ronald Reagan, who died from Alzheimer's and is arguably its most prominent victim. Though away from the office, Doody's presence there that day could not have hit closer to home on behalf of her patients and the 4.5 million Americans who suffer from the neurodegenerative disease.

Lobbying for a cure

The day started off auspiciously enough with that most public of instant messaging – a press conference. Doody was joined by three fellow Alzheimer's doctors and several spokespersons, all of whom championed the Texas Consortium of Alzheimer's Disease Centers, a collaborative enterprise uniting the best minds in the state to tackle the disorder.

"Within the framework of the Texas Consortium, advances at any one of the centers will now be translated into quickly testable research questions," said Doody, professor of neurology and Effie Marie Cain Chair in Alzheimer's Disease Research at Baylor College of Medicine, as she stood before a row of TV cameras and reporters. "Researchers will share ideas to advance their individual projects during the early stages of development and will then propose methods for using the data, biological samples or volunteers at all of the centers in order to complete these projects."

Doody went on to outline the role of the BCM Alzheimer's Disease and Memory Disorders Center, which she directs, in the consortium. Ongoing projects, she explained, are studying how normal brains age and what factors increase susceptibility to onset of Alzheimer's disease and other dementias. Also being investigated are the factors that make disease progress rapidly in some patients and slower in others. Such research will contribute to improvements in treatments that could include lifestyle changes, drugs and immunization approaches, she said.

Drumming up sympathy around combating a deadly disease isn't the hard part; squeezing dollars out of a perpetually tight state budget is. Shortly after the press conference, Doody and her colleagues in the consortium – which includes Alzheimer's disease centers at BCM, Texas Tech University Health Sciences Center in Lubbock, the University of North Texas Health Science Center at Fort Worth and The University of Texas Southwestern Medical Center in Dallas – met behind closed doors with Lieutenant Governor David Dewhurst's staff members to discuss how the proposed renewal of $2 million in funding requested by the consortium would be put to use.

Next on the agenda was a benefit luncheon, hosted by the Alzheimer's Association, which was held in tribute to former Texas House member and energy lobbyist Joe Allen, who has Alzheimer's and is a patient of Doody.

The event also honored State Senators Robert Duncan, Jane Nelson and Steve Ogden, who each received Texas Alzheimer's Leadership and Public Service Awards for their roles in securing the first $2 million appropriation during the 2005 legislative session.

"I didn't realize until I lived it how many other people out there have gone through the same thing I went through," said Nelson, whose mother died from Alzheimer's, "and I couldn't have done it without the help of the people right here in this room [researchers and supporters] – all coming together."

Dewhurst received the Texas Council on Alzheimer's Disease 2007 Leadership and Public Service Award for his support of Alzheimer's research in Texas.

"There are some perks to being lieutenant governor," said Dewhurst, whose mother died from Alzheimer's, "and one of those perks is the funding [for Alzheimer's research] will continue and most likely increase."

While her lobbying stint once again proved vital on behalf of the researchers and patients she was there to represent, Doody isn't about to quit her day job.

"Continued funding ensures that academic centers will work in a concerted fashion to improve the diagnosis and treatment of those with Alzheimer's," said Doody. "Our research studies, which use state-of-the-art technologies that would not otherwise be applied to Alzheimer's disease research in Texas, will advance the field and lead to a better future for those who are at risk."